Sir Vince Cable has given his support to Stephen Williams as the Lib Dem West of England mayoral candidate today, saying that Williams's economic plans would lead to a “thriving, sustainable and attractive place to live and work”.

Stephen Williams has already set out a package of measures to invest in the region’s local economy, including plans to: 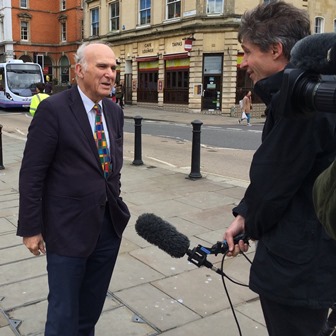 "Stephen has set out an ambitious and deliverable plan, which will ensure the region remains a thriving, sustainable and attractive place to live and work. His plans for investment is great news for increasing prosperity in the region – helping local people find skilled jobs through increased investment in training and helping local businesses grow into the future.

"This election is a chance for people to send a strong message against a hard Brexit that damages local jobs by pulling Britain out of the Single Market. The Tories have destroyed their reputation for economic competence and Labour are focused entirely on in-fighting.

"The Liberal Democrats are the only party taking this election seriously. We are united, focused and in Stephen Williams the Lib Dems have selected a credible candidate with years’ worth of experience, who is respected by businesses and voters across the region."

"I want to encourage local businesses, large and small, to talk to me about their Brexit worries and if elected as the first West of England Mayor I would lobby the Government directly about what their businesses need from any Brexit deal.

"I'm proud to have been selected as the candidate for the Liberal Democrats, the only party fighting to protect the region’s economy by staying in the Single Market. This election is a clear choice between me and the inexperienced, Brexit-defending Tory candidate and I will bring Bath, North East Somerset, Bristol and South Gloucestershire, together, with one voice."

To read Stephen Williams's preview of his plans for a prosperous and sustainable West of England economy, see here: https://stephenwilliamsmp.wordpress.com/2017/03/20/my-plans-for-a-prosperous-and-sustainable-west-of-england-economy/. The full version will be available shortly.