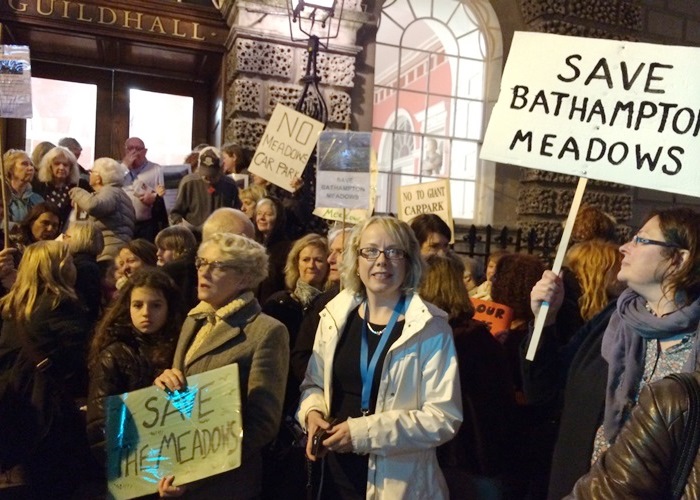 However Liberal Democrat proposals, allowing for a parallel review of all options to be carried out by Scrutiny, were accepted as a last minute addition. Over 80 residents spoke at the Council meeting, which lasted for 6 ½ hours, and scores more protested outside.

"Earlier this week the Conservative Group Leader promised a review of the proposals around an East of Bath Park and Ride. We welcomed this partial climb down and hoped that this was a sign that the administration were willing to listen to the strength of local public opinion.”

“Unfortunately, the Conservatives’ suggestion at Council of a quick review, by an informal working group, made it clear that they were only paying lip service to the idea of an alternative and were still fixated on a Park and Ride on the Meadows as the only solution."

“After an emergency meeting of the Group Leaders, within the meeting itself, they accepted our additional wording. This will allow Councillor Butters and me to ask the Communities, Transport and Environment PDS Panel to carry out a parallel examination of all the sites and all possible integrated transport solutions, solutions that are not standalone Park and Rides.”

"I was overwhelmed by the passion and knowledge of the local residents who came to speak at full Council last night and I am incredibly grateful that so many of them did. The Conservatives can be under no illusions as to the strength of local feeling."

"However, they need to allow enough time for this review to take place properly and independently, if possible harnessing some of the many ideas put forward by the eighty-plus residents who spoke at the meeting last night and from the hundreds of people who took the time to write in."

UPDATE: the minutes of the Council meeting, including the results of the named votes, have been published online here: LINK